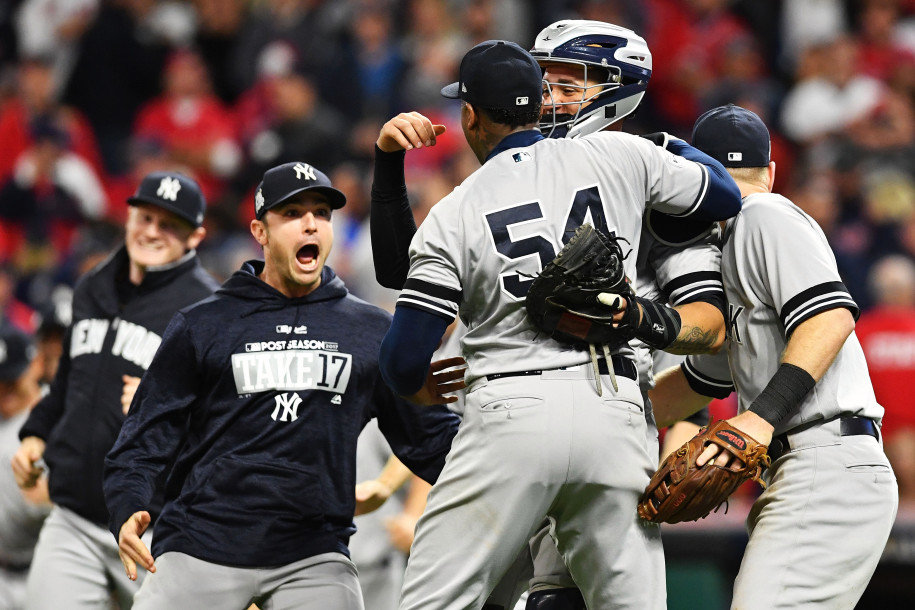 The New York Yankees started off fast in Game 5 of the American League Division Series (ALDS) by putting up 3 runs after Yankees' slugger Didi Gregarious slammed two home runs, one in the 1st inning and another 2 run homer in the 3rd inning. Although the Indians were down, Tribe fans began to rally behind their team as pitcher Corey Kluber struck out Yankees Aaron Judge to end the side, while continuing Judge's batting woes in the postseason.

#ClinchCam of the moment the @Yankees' punched their ticket to the #ALCS! pic.twitter.com/MKe9sTm7EM

Moving on to the 4th inning, Indians' Francisco Lindor had a base hit but was left stranded. By the 5th inning Tribe outfielder, Austin Jackson recorded a base hit against C.C. Sabathia and was able to advance to second base after a Jay Bruce singled with one out and with 2 on. That's when the Cleveland Indians' Roberto Perez drove home Jackson to make it 3-1. The Tribe also managed to get another run, making it 3-2 in the bottom of the fifth with one out and two men on base, however, a double play by the Yankees stopped the bleeding and helped the Yankees get out of the 5th inning.

Indians pitcher Corey Kluber was pulled early in the game and replaced with Andrew Miller after the Indians fell behind. And although Andrew Miller was red hot, Indians manager Terry Francona sat Andrew Miller while in the 6th to preserve his bullpen bringing in Bryan Shaw who got the final out in for the Tribe in a scoreless sixth inning for the Yankees.

With one on and one out, Indians pitcher Bryan Shaw threw a strikeout to Aaron judge and the Tribe caught the runner at second, making it a strike-out/throw-out at the top of the seventh inning. Yankees pitcher David Robertson walked Jay Bruce with two outs and nobody on at the bottom of the seventh inning, but Roberto Perez of the Indians left Bruce stranded to end the 7th scoreless.

An error by Indians Austin Jackson in the outfield turned a single into extra bases for the Yankees, putting Aaron Hicks on second base with one out in the 9th. With Cody Allen pitching in the 9th inning Yankee's Brett Gardner managed to stay at bat hitting foul balls for what seemed like an eternity for Cleveland Indians fans until he recorded a single that drove in a run which also resulted in an error that drove in a second run putting the score 5-3.

After the runs were scored Terry Francona put in Joe Smith on the mound with Aaron Judge at the plate and Gardner as a Yankees runner on 2nd. Aaron Judge was ineffective and couldn't bring in in the runner and as a result ended the inning.

In the bottom of the 9th, Jose Ramirez was walked, and left stranded on second as Austin Jackson was struck out, but failed to run after a dropped pitch, ultimately giving the Yankees the win on the road and a chance to play for the American League Championship vs the Houston Astros.