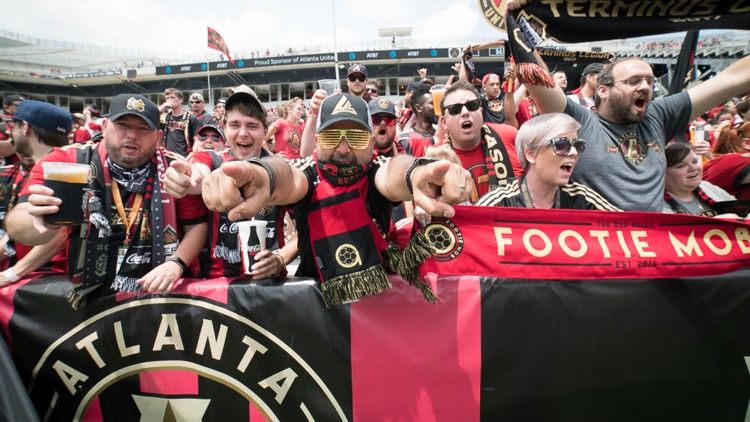 The story of Atlanta United’s first season is halfway told and already the revelations have come in waves. And they are not all confined to the soccer field squeezed into big-time college football’s oldest address. Not all stem from an expansion team that is tied for the league lead in goals and daring to make itself a potential playoff nuisance.

For instance, look to the seats at Bobby Dodd Stadium. See the flags waving. Experience the mingling of nations and a fandom that speaks with an accent other than Southern. Hear the constant chants consume an entire building in unison, as opposed to the random roars of the football crowd.

Did you know that this city can care about soccer? Fervently? Like game-show audience fervent?

Perfectly reasonable young professionals like 33-year-old Jason Wells — a regularly-dressed Georgia Tech football season ticket-holder in another life — will wear a Roman Legion helmet and stand at the end-zone rail chanting and cheering nonstop for his soccer team. For all 90 minutes, plus stoppage time.

“It’s constant energy. Constant focus,” said the member of one of several supporter groups that have arisen around Atlanta’s MLS team, this one called Terminus Legion.

When Alpharetta’s Sandra Platten, 40, talks about her connection to Atlanta United, it is with evangelical zeal. Hers is a familiar kind of Southern sporting desire, redirected to hands-free football.

“I grew up in Atlanta and the experience (at an Atlanta United game) had been completely different from any other. Everyone needs to experience this. This is a very passionate game,” she said.

Is what Atlanta has going on here with its new soccer team a flirtation with a new diversion, a temporary fling? Or some kind of more permanent shift in the local sporting culture?

“You think, ‘OK, everyone will be excited and then it will die off.’ But six months in, the excitement only seems to be growing,” Atlanta United midfielder Jeff Larentowicz said.

The goalkeeper for this outfit is from these parts and he has been somewhat knocked back on his heels by the fan support and the home game scene.

“It’s unlike anything else in MLS,” Decatur’s Alec Kann said. “Everyone I’ve brought to a game, whether they’re from here or not, says it’s the best sporting event experience they’ve had in their lives. That tells you everything you need to know.”

Unlike the rest of domestic professional soccer in what way, exactly?

“Most stadiums hold 20,000 people. We sellout 45,000 every week, so there’s definitely that,” Kann said. “They’re very organized with the chants and things like that. We build momentum through the crowd.”

The next momentum-building experience is scheduled Tuesday night, against the San Jose Earthquakes. Imagine, soccer inserting itself into the tapestry of the most American of holidays, the Fourth of July. Fireworks. Hot dogs. Corner kicks.

At home is where this expansion team has sharpened its claim to legitimacy, winning five of seven matches at Bobby Dodd, including the last four straight.

Keep that home-field advantage in mind when considering whether Atlanta United — currently fifth in the Eastern Conference — can extend its first season into the playoffs (top six in each conference make it). Ten of the team’s final 17 games are at home, including eight of the last 10.

Atlanta United is atop the MLS in one notable category: attendance. It’s home average of 46,698 has soared above the league’s traditional attendance champions, Seattle (42,628), according to Soccer Stadium Digest. It’s a following that stands on its own even when compared to places where soccer rules. According to a recent Forbes account, that figure would rank seventh among top English teams and 24th among those across Europe.

It’s how those numbers come to play that has mildly surprised the blokes on the field.

“The fan base has been fantastic. It has exceeded all our expectations,” defender Michael Parkhurst said. “As players, we heard about the season ticket-holders and the numbers but it’s not just the numbers. It’s the atmosphere. It’s the passion. It’s the singing, the chants. It’s an awesome environment to play in front of and it’s a big reason for a win streak at home.”

The team’s director of marketing and fan engagement, Sarah Kate Noftsinger, takes pride in the fact that it isn’t her department that creates the game-day mood. Like most passion, it either burns naturally or it doesn’t. You can’t force it. No amount of blaring music or overbearing announcing is going to make you care, so Atlanta United doesn’t traffic in such trifles.

With the fans themselves doing much of the heavy lifting in the ambience department, they have provided an authenticity to the experience that has played very well through the first half of the first season.

“People used say, ‘Ah, you don’t know what it’s like, you got to go experience a match in Europe. Or you need to go to South America to experience a match,’” Noftsinger said. “The reality is we actually have the experience here, in Atlanta. You don’t have to go overseas. It’s something this city has embraced.

“I wouldn’t say it’s an anomaly by any means,” she said. “It’s all about participating in something as opposed to manufacturing something.”

The old football stadium at Georgia Tech has proven to be an almost perfect setting for one soccer team’s origin story. Only two more Atlanta United games remain there until the team is scheduled to move into the new Mercedes-Benz Stadium in September.

Will the franchise be able to crate up the quainter charms of game day at Bobby Dodd and transplant them inside Arthur Blank’s stately pleasure dome? How will the fans adapt to their more plush, sophisticated surroundings? Will the team take the winning with it across town? Yes, winning is essentially important to keeping the upbeat atmosphere alive. Those are revelations for the second half.

For the time being, there are a couple more group hugs all around between a soccer team and its temporary on-campus home. “All the players enjoy playing (at Bobby Dodd). The field is perfect. The fans are great,” Larentowicz said. “It’s going to be tough to leave, to be honest.”

Said Kann, the hometown goalkeeper who knows the landscape by heart, “Bobby Dodd will definitely hold a special place for all of us for the moments we’ve had there.”