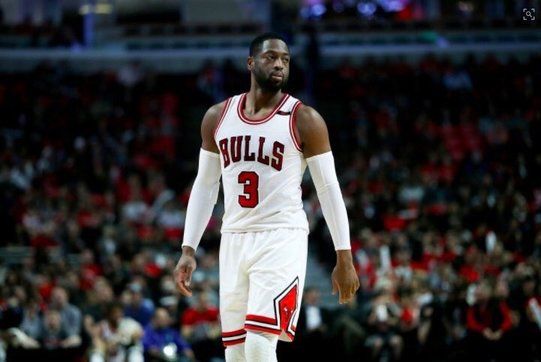 Dwyane Wade and the Chicago Bulls have reached an agreement

BREAKING: Dwyane Wade and the Chicago Bulls have reached an agreement on a buyout. Cavs, Spurs, and the Heat are top contenders to sign him.

BREAKING: Dwyane Wade and the Chicago Bulls have reached an agreement on a buyout. Cavs, Spurs, and the Heat are top contenders to sign him.

According to ESPN's  Adrian Adrian Wojnarowski the Chicago Bull's and Dwyane Wade are ready to part ways and have reached a buyout agreement. Woj states that the Cleveland (Cavs) are the clear front-runner with LeBron James, but Wade may take a little time to decide.

Wade and the Bulls Part Ways

Wade also lists the Oklahoma City Thunder as a possibility after acquiring Carmelo Anthony on Saturday. Wade played the first 13 seasons of his career with the Miami Heat and the link to Cleveland comes as no surprise considering to his relationship with Cavs superstar LeBron James.

Wojnarowski reported that Wade gave back approximately $8 million of his $23.8 million salary to reach buyout agreement with the team, and that the Cavs are the front-runners. Wade, 35, spent only one season in Chicago and averaged 18.3 points while the team reached the first round of the playoffs. Johnson reported earlier this week that the two sides were working on a potential buyout with the Bulls in a rebuild and Wade toward the end of his prolific career.

“Some dialogue is going on,” Bulls vice president John Paxson said on The Score via the Chicago Tribune. “We understand where (Wade) is at this time of his career. We’re more than willing to work with him. But as I said when we had the press conference to introduce the new players after the draft, we have to always do what’s in our best interest. So there has to be something that is mutually agreed upon. It can’t be something the player wins because that’s what he wants. “We want to work with Dwyane because we respect him very much. If he doesn’t want to be here, then we want to do (the buyout). But again, the bottom line is always — and it has to be — that we have to do what’s in our best interest.”

Could the duo of LeBron & Wade reunite in Cleveland?