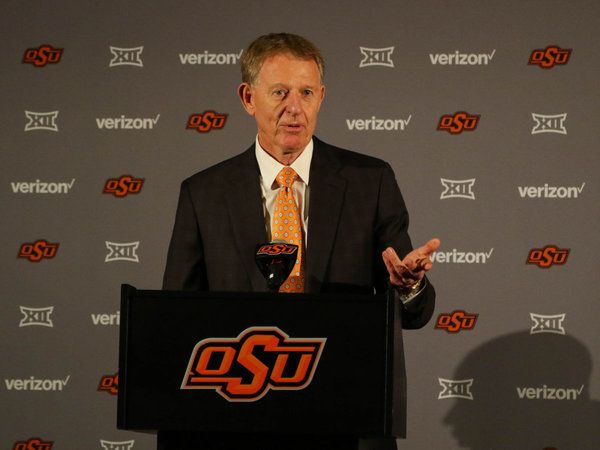 The university also released a statement Tuesday shortly after the incident was reported.

“I want to reiterate that Oklahoma State University was shocked by the allegations made yesterday against one of our assistant men's basketball coaches," Holder said in Wednesday's statement. "We learned about the allegations the same way most people did through media reports. The allegations are serious and they violate everything we stand for as an athletic department and university.

"As we have already stated, we will cooperate with federal officials and coordinate with the NCAA as we move forward with looking into this matter to the fullest extent. Let me underscore, we expect every person affiliated with our athletic program to conduct themselves with integrity and to comply with the rules and the law.”

Evans turned himself in to the U.S. Marshals Office at about 9 a.m. Wednesday. Federal prosecutors announced charges against him Tuesday morning after Evans allegedly took cash bribes to deliver athletes to an adviser or agent.

Evans was one of four NCAA basketball coaches charged in the FBI's report. The report included 10 people in total, which included financial advisers, representatives of a major international sportswear company (Adidas) and team managers.

“We were surprised to learn this morning of potential actions against one of our assistant basketball coaches by federal officials," OSU said a statement. "We are reviewing and investigating the allegations. We are cooperating fully with officials. Let it be clear we take very seriously the high standards of conduct expected in our athletic department. We will not tolerate any deviation from those standards.”

OSU announced later Tuesday that Evans has been suspended indefinitely.

“Based on the serious and troubling allegations in the complaint, Oklahoma State University has suspended assistant coach Lamont Evans," the statement said. "We are cooperating with federal officials. We have been in contact with the NCAA and will provide additional information as it becomes available. OSU takes seriously the high standards of conduct expected in our athletic department and does not tolerate any deviation from those standards.”

Evans' investigation ranges from his time as an assistant at South Carolina to last season. Evans joined the OSU coaching staff before the the 2016-17 season as an assistant coach and recruiting coordinator on then-coach Brad Underwood's staff.

When Underwood left OSU after last season, Evans stayed on staff with new coach Mike Boynton, who was promoted from assistant coach. Evans was given the title of associate head coach and remained the team's recruiting coordinator.

In a press conference at 11 a.m. Tuesday, Joon Kim, the acting U.S. attorney in Manhattan, said the operation was covert until Tuesday and he didn't think the NCAA was aware of the investigation. Kim also said the investigation was ongoing.

"The nature of the charges brought by the federal government are deeply disturbing," the NCAA said in a statement. "We have no tolerance whatsoever for this alleged behavior. Coaches hold a unique position of trust with student-athletes and their families and these bribery allegations, if true, suggest an extraordinary and despicable breach of that trust. We learned of these charges this morning and of course will support the ongoing criminal federal investigation.”

A federal Public Information Officer in Oklahoma City, told the O'Colly Evans turned himself in to the U.S. Marshals at about 9 a.m. Wednesday.

The court document states Evans "steered" a player on the 2016-17 OSU basketball team to a cooperating witness in exchange for a bribe.

Evans set up a meeting between the cooperating witness and the player in West Virginia before OSU's game on Feb. 4, according to the document.

Later in the document, it states Evans said the player is:

"Going to come back to school. He's not going to the draft. That's what he says. He got advice from the NBA to come back for the year."