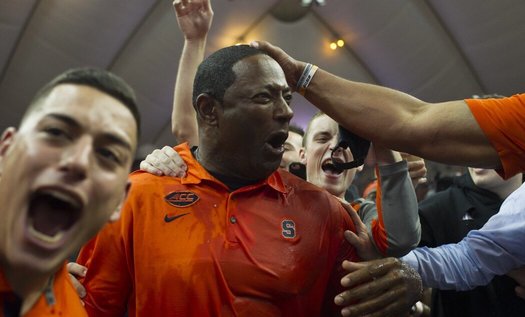 This play cemented Syracuse's (4-3, 2-1 Atlantic Coast) 27-24 surprise victory over then No. 2 Clemson (6-1, 4-1). SU ran out the clock to finish what will probably be the most stunning game of the 2017 school football season. Syracuse fans rushed the playing field, breaking past a Clemson to celebrate the Orange's feat.

Syracuse Orange head coach Dino Babers celebrated with his team while being mobbed by the ecstatic Orange loyalists and delivered this inspiring locker room speech chant after the game.

Just watched Dino Babers in the 'Cuse lockerroom postgame and I'm ready to run through the sliding glass door pic.twitter.com/zqn696JK8N

The win is effectively one of the greatest Syracuse win in late program history. It brings Syracuse nearer to bowl qualification. This win by the Orange gives hope to that the team can win against any of their remaining competition and it Gives Dino Babers national recognition, while helping raise Syracuse's recruiting prospects.