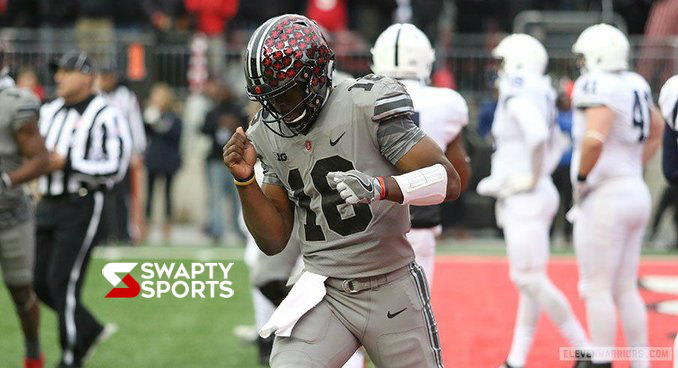 #2 Penn State came into the horsehoe in Columbus, Ohio with ambitions of a title shot and visions of knocking off the #6 ranked Ohio State Buckeyes but it wasn't going to be easy. The Buckeyes strapped up in their LeBron James kicks and prepared for battle in a game that was played a sloppy by the Buckeyes for much of the first half and parts of the 2nd half but in the end Ohio State came out on top.

Penn State's superstar running back and Heisman front-runner Saquon Barkley did not disappoint on the first play of the game. On the opening kickoff, Barkley had a 97 yard return for a touchdown, silencing the Ohio State fans in the Horseshoe.

Ohio State special team's has been an issue throughout the season, and today was no exception to add to the Buckeyes woes in the 1st quarter, the offense had several mishaps that lead to penalties and a turnover by Parris Campbell which put the Nittany Lions in scoring position which led to DaeSean Hamilton, Penn State's all-time leader in catches, catching a short TD pass from Chase McSorely. On Ohio State's second possession the Buckeyes made it into scoring position, but quarterback J.T. Barrett was sacked on 3rd down forcing the Bucks to settle for a field goal making the score 14-3.

A gutsy call by Ohio State to go for it on 4th and 8 on the 30 yard line failed to convert into a 1st down fails as Penn State ended the quarter 14-3.

Penn State's first quarter offense was not stellar, but that was because Ohio State gave them great field position. In the second quarter, a penalty by Jerome Baker gave Penn State the first down and set up a 36 yard run play for Saquon Barkley who bounced out to the left to score a touchdown score that was reviewed and upheld by the officials.

On the following possession, JT Barrett tossed TD strike to his wide receiver Terry McLaurin, giving Barrett his 91st touchdown pass in his career as a Buckeye and passing Drew Brees as the all-time leader in TD passes in the Big Ten.

No. 91 is hauled in by Terry McLaurin: pic.twitter.com/aCBAHaqV9t

Ohio State's special teams woes continued in the 2nd quarter as Penn State's Koa Farmer had a big kick return into scoring position against, which further fired up Urban Meyer. The Buckeyes thought they had a gift in an interception, however the officials managed to call a pass interference against the Buckeyes, which set up the Penn State Nittany Lions for a touchdown run by quarterback Chase McSorely.

The Buckeyes managed to move the ball well behind J.T. Barrett, as they went 10 plays for 75 yards on a drive that was capped off with a Mike Weber touchdown that was aided by a pass interference from the Penn State defense. making the score 28-17 with about 5 minutes left in the quarter.

Penn State failed to convert on 3rd & 6, punt, now in a scary spot to be in giving Ohio State the ball back with 1:31 left! 3rd and 16 for the buckeyes, franklin called a let the time run out, which was a brilliant choice to take the delay of game since it allowed him to conserve the his final time out when the buckeyes couldnt move the ball. Penn State recevied a punt with 29 seconds left, but a delay of game penalty made the Nitanny Lions choose to take a knee.

Although the Buckeyes trailed the entire first half of the game, they out gained Penn State and JT Barrett led all rushers and passers going 11 runs for 77 yards and 13/17 for 96 yards passing and one touchdown pass, while Saquon Barkley had a total of 70 yards including a 47 rush yards (1 TD), 23 receiving yards, and 97 yards on a kick return for a touchdown.

On the opening drive of the 3rd quarter Ohio State continued to move the ball and showed resiliency by converting a 3rd and 1 on a JK Dobbins run into Penn State territory. However, the Buckeyes recorded their fourth false start on the drive which pushed the Buckeyes back and ultimately led to a field goal attempt and score by kicker Sean Nuernberger capping off a 10 play 57 yard drive, making it 28-17 Penn State.

Just when Ohio State thought they were about to get a break on Penn State's 3rd and 11, Trace McSorely broke free and gained a first down by escaping pressure and followed the play up with another 12 yard gain putting PSU into OSU territory.  Then OhioState's Denzel Ward just stole the ball from #PSU's Deandre Thompkins for an interception in end zone! Play overturned! PSU touchdown making it 35-20.

Ohio State dropped pass by and Ohio States receiver fumbled the ball but the Bucks were bailed out by a defensive holding call against Penn State. As the Bucks began to move the ball down the field another penalty was called against Ohio State for holding making it 1st & 20 at their 41 when the Bucks coaching staff tried to call an audible but failed making it 1st & 25 on the 46 and eventually forcing the Buckeyes to punt the ball.

Penn State started the next possession off at the 6th, but a strong rush by the Bucks defense put Saquon Barkley down inches away from their own end-zone just feet away from a safety. Penn state made up for it on 2nd & 15 with a 20 yard pass for a first down and Barkley followed up with a piercing 8 yard run up the middle, but Penn State's drive was thwarted by Ohio State's pressure when Jordan Fuller made a clutch tackle on Saqoun Barkley forcing a punt.

On 4th and 1 the Buckeyes fumbled a handoff between J.K. Dobbins and J.T. Barrett adding to the Buckeyes mishaps which at that moment in the game included giving up a kick return for a TD, 2 lost fumbles, 10 penalties, interception that was overturned.

Ohio State finally got a break when Denzel Ward blocked a Penn State's punt attempt which led to a crucial touchdown pass from J.T. Barrett to receiver Johnny Dixon.

Chase McSorely gashed the buckeyes for a 23 yard run to the OSU 47, but his following pass was dropped and a hold was called against the PSU offensive line making it 1st and 20 leading to a 2nd and 20 when PSU's Barkley was wrapped up at the line of scrimmage. ON a crucial 3rd and 13 PSU's tight end Mike Gesicki hauled in a big pass play for a first down. PSU settled for a field goal makin it 38-27.

J.T. Barrett executed the following drive with surgical precision, capping it off with a second TD pass to Johnnie Dixon, but a failed 2 point conversion made it 38-33 PSU with 4:20 left in the 4th quarter. 5 plays 76 yards in 1 minute and 7 seconds. Ohio State's defense showed up big time forcing Penn State into a 3rd and 19, smothering Saquon Barkley on run plays and forcing a punt with 3:20 left on the clock.