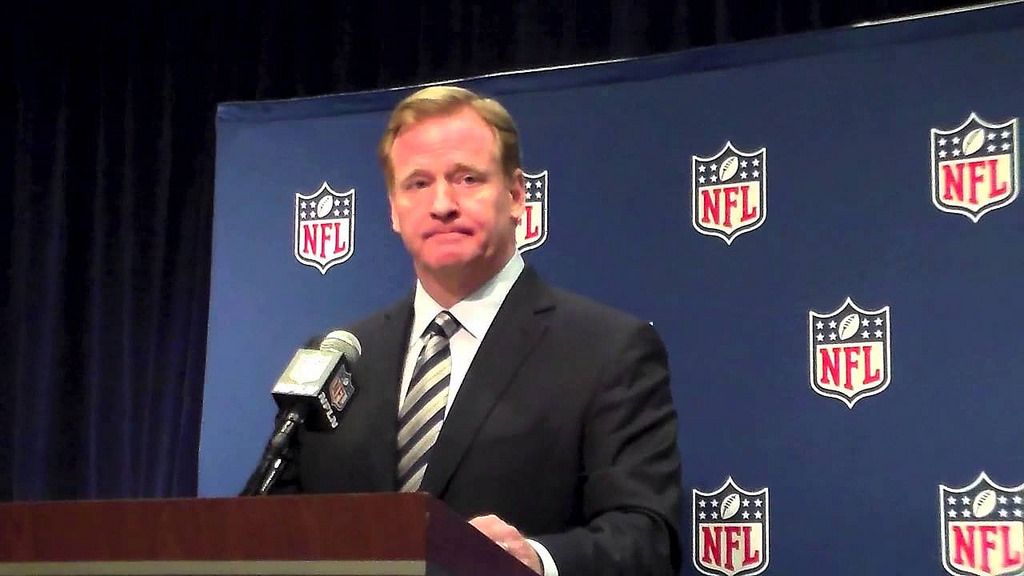 The NFL's national anthem protests have persisted, and NFL owners are becoming antsy. Between a continuous quarrel with President Donald Trump and an ever increasing number of fans standing in opposition to the dissension that has occurred, the NFL has been put in a peculiar position. On Tuesday, NFL commissioner Roger Goodell sent a letter out to NFL execs, advising them on the protest controversy. ESPN's Adam Schefter posted a full copy of the letter that ESPN obtained.

The NFL has done a lot of maneuvering in regards to their stance on players kneeling. While the NFL as an whole has said that it would prefer that players would stand united, it has also acknowledged that players have the right to protest during the anthem. NFL owners have been perturbed by the fan response, and have started giving players ultimatums regarding the anthem. Jerry Jones told players to stand during the anthem or sit during the game, whereas Adam Gase and the Dolphins told players to stand or stay in the locker room until game-time.

In letter to NFL owners, Goodell says, "[W]e believe that everyone should stand for the National Anthem."

Furthermore, NFL owners will be meeting to discuss making standing during the national anthem mandatory. The move would undoubtedly be controversial -- the First Amendment has been a major sticking point throughout the debate -- but as the NFL is technically a business it would be a long battle if the NFL Players Association wanted to pursue the move as a freedom of speech violation.

Although Goodell doesn't seem to have any idea of how to handle the protests, he does have his opinions, which he stated in the letter. Goodell talked about the pride that he had in players for their community outreach and their raising of social awareness. "I'm very proud of our players and owners who have done the hard work over the past year to listen, understand and attempt to address the underlying issues within their communities," Goodell wrote.

But, there's always a but. "Like many of our fans, we believe that everyone should stand for the national anthem," he said. "It is an important moment in our game. We want to honor our flag and our country, and our fans expect that of us. We also care deeply about our players and respect their opinions and concerns about critical social issues." Obviously this is the sticking point that the league is dealing with. At this point, it can't have it both ways. "The controversy over the anthem is a barrier to having honest conversations and making real progress on the underlying issues. We need to move past this controversy, and we want to do that together with our players," he continued.

"Building on many discussions with clubs and players, we have worked to develop a plan that we will review with you at next week's League meeting," he said. "This would include such elements as an in-season platform to promote the work of our players on these core issues, and that will help to promote positive change in our country."

Goodell seems to be determined to reach an amicable decision on a polarizing issue. The letter is written extremely diplomatically, and it seems Goodell doesn't want to see the players silenced, but rather more open to expressing themselves in a less controversial way. Some players may have a problem with this -- it undermines the point of a protest to an extent -- but the league clearly has a vested interest in ending these protests without infuriating its employees.
Although Goodell is walking on eggshells throughout the letter, the meeting with the owners will be telling. If the NFL implements a rule change regarding the anthem, the fallout would be huge. However, these protests are starting to affect the NFL's bottom line, so it makes sense that the owners want to find a way to stop them. Whatever happens from here on out, the result of the owners' meeting will be extremely controversial, and there will undoubtedly be a contingent of unhappy people on one side.
fShare
Tweet