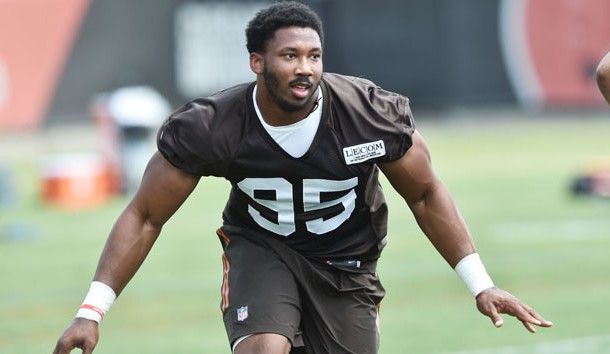 The Cleveland Browns are hopeful No 1 pick Myles Garrett will be available for training camp next month after suffering a foot injury.

Garrett was hurt in practice on Wednesday, and there were early fears of a significant injury which were only heightened by silence from the franchise for nearly three days.

He was also pictured in a walking boot at Cleveland Hopkins Airport after sustaining the injury when he tried to sack new Browns quarterback Brock Osweiler.

But the Browns confirmed on Saturday that a scan had shown only a lateral sprain in his left foot that should not keep Garrett out long-term. Big things are expected of Garrett, who signed a fully guaranteed $34m four-year contract last month, a deal that also included a $20m signing bonus.

The Texas A&M product, who piled up 32 sacks during his three years in college, is expected to be near 100 per cent by the time the Browns open training camp on July 27.