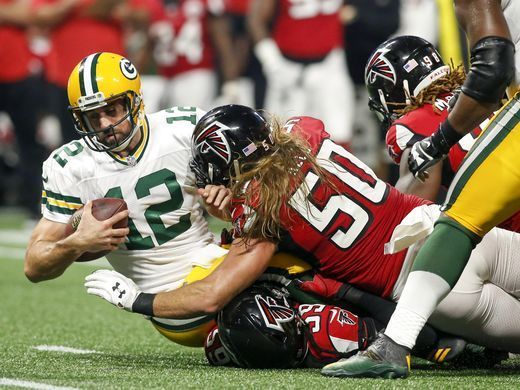 Eight months ago in the NFC title game, Rodgers spent the day in a futile comeback attempt as the Falcons built a 31-0 lead en route to a 44-21 victory. This time, Atlanta went up 31-7 early in the third quarter to provide a last game-first game type of symmetry.

Ah, the Packers. They bring the defense the Falcons can never get enough of.

Late in the fourth quarter, NBC displayed a graphic with the following: In the past three meetings against Green Bay, including the playoff game, Atlanta has scored 111 points and gained 1,224 yards.

It’s like the Falcons should send flowers or something.

Still, as striking as it was that the NFL schedule makers picked this opponent for the Falcons for this particular showcase game, it had to play itself out against the possibility of "what if?"

After all, Green Bay’s defense didn’t allow a touchdown in the season-opening win against the Seattle Seahawks.
But that effort, keyed by a relentless rush, was at Lambeau Field against an offense stung by a suspect offensive line. The Falcons are a different type of bird, with weapons galore.

Then again, the Atlanta offense has a new coordinator in Steve Sarkisian, fueling just enough questions about whether he’ll deploy the weapons as effective as Kyle Shanahan did last season, when the Falcons scored an NFL-high of nearly 34 points per game.

In the opener, Jones was targeted just five times (four catches, 66 yards) and there were extended portions of the game when he didn’t see the football come his way. Fair or not, that came to symbolize the sum of general misfiring.

And allof that was undoubtedly forgotten on Sunday night, when the Falcons marched up and down the field like the old times at the now-vacant stadium next door. Jones had 53 yards on two catches on the first drive and finished with 108 yards on five catches.

The balance was what we’ve come to expect. Ryan, the NFL’s reigning MVP, passed for an efficient 252 yards. Freeman rushed for 84 yards, with two TDs. Mohamed Sanu had five receptions for 85 yards.

The Falcons’ fast, young defense contributed to the tally, too, with Desmond Trufant returning a backwards pass by Rodgers (technically a fumble) 15 yards for a touchdown early in the third quarter to make it 31-7.

Give the Packers some credit: They never quit. They lost Jordy Nelson (quad) and Mike Daniels (hamstring) early in the game to injuries, and came into the contest without both starting tackles, David Bakhtiari and Bryan Bulaga. But they never folded.

Maybe it will be different next time. But for now, the same ol’ stuff.

In January, the Falcons closed the Georgia Dome with a farewell party that clinched a trip to the Super Bowl.

Now it’s a house-warming party. It’s way too early to suggest that the Falcons will buck the NFL trend and get back to the Super Bowl after their deflating setback in Super LI.

But at least there’s something familiar to claim. Home turf is still quite the advantage until proven otherwise.

Source: Falcons show they can still soar in convincing win over Packers