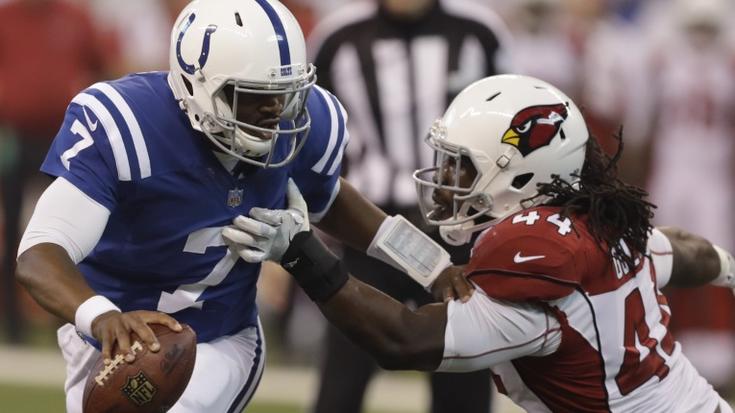 Colts Not Able to Get it Done

In what's becoming the norm, the Colts found a way to get it done the Colts way - which is not winning. If the Colts star quarterback Andrew Luck doesn't returns soon, the Indianapolis Colts season could very well be over.

In his first start at quarterback, Jacoby Brissett looks like he's competent and confident and shows he can make some plays, although he's not yet polished, there is something there for the Colts to work with. The Colts also showed they can run the ball and stop the run, however this was undermined by the Colts making careless mistakes such as hitting the punt returner after he called for a fair catch right, and holding penalties on key plays. On top of that, the Colts managed to rack up seven penalties in the second half after only one in the first half.

There is hope for the Colts with Jacoby Brissett at QB, however the margin for error is narrow for the Colts as a whole. On the defensive end, there were several bright spots for the team to look at on tape such as the rookie saftey Malik Hooker's interception of a Carson Palmer (Passing 19/36, 333 Yards Passing, 1 TD, 1 Int) pass at the end of the first half.

The bright spot for the Colts season is they have a fairly weak upcoming schedule versus opponents such as the Cleveland Browns and the San Francisco 49ers within 3 weeks. This week schedule ought to give the Colts an opportunity to put a W or two in the win column.

"We played well on defense (giving up only 13 points in regulation)... You had opportunities sitting right there in front of you and you let people hang around, in the National Football League, it's going to come back to haunt you. We had a golden opportunity at first and goal on the seven yard line to go up 17-3."