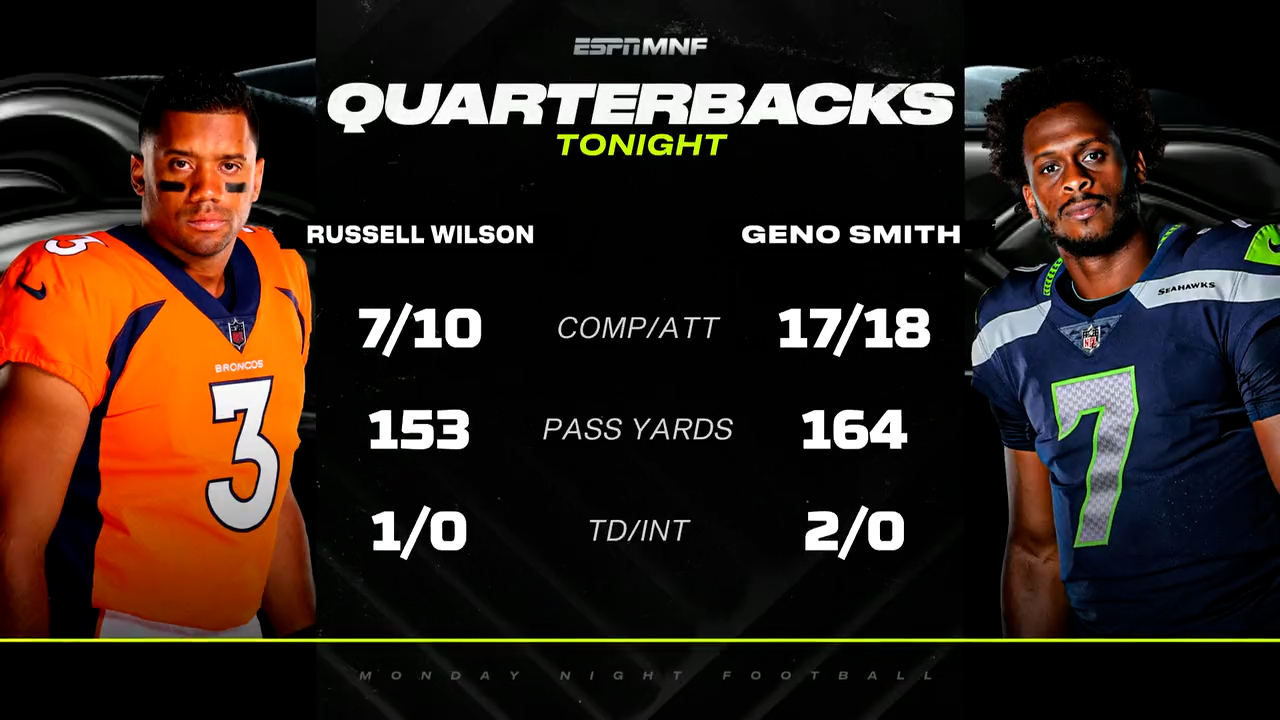 Broncos quarterback Russell Wilson returned to Seattle to play against his former team for the first time since signing with the Broncos, but Wilson's wasn't greeted as expected, as the crowd at Lumen field greeted Wilson with a chorus of boos.

First Half - Broncos vs Seahawks

On the other hand, Seattle Seahawks' new starter, Geno Smith, was lauded with chants of "Geno, Geno" after starting off the game with an impressive 13/13 in pass completions and 17/18, 164 yards passing and 2 pass touchdowns at halftime. Russell Wilson put up some decent numbers by the half with 10/15, 206 yards.

Denver moved down the field on the opening drive of the second half, but a few penalties in the red zone slowed them down and a fumble on 4th & goal ended Russell Wilson's drive, where he was 5/5 in pass completions. On Seattle's opening drive of the second half, the Seahawks benefited from a pass interference and a roughing the passer call. DK Metcalf showed up with a big play on 3rd down and 10, with a 15 yard reception, but DK Metcalf was stripped of the football on the next play and fumbled, resulting in a 15 yard gain for the Broncos defense. After Seahawks drive ended in a fumble, Russell Wilson and company moved the ball down the field and a big Russell Wilson to Albert Okwuegbunam pass put the Broncos on the goal line, but again, the Broncos fumbled, spoiling their chance to score, resulting in a touchback for the Seahawks. Geno Smith ended the 3rd quarter with a big run to make up for penalties against the offense, making it 3rd and 2nd.

"They wrote me off, but I ain't call back though" - Geno Smith, at the end of the game

Seattle Seahawks QB Geno Smith to his haters: “They wrote me off, but I ain’t write back, though!” #Seahawks #DENvsSEA @AdamSchein https://t.co/ELnqSkcOgU pic.twitter.com/E6ihyT6VZ7

Geno Smith picked up where he left on 3rd and 2 with a run around the end to pick up the first down, but the drive was cut short after a batted pass was caught by the offensive lineman and the Seahawks offense was forced to punt to end the drive on subsequent plays.

Seattle had no luck on the subsequent drive, as Seahawks QB Geno Smith was sacked on third down, making it a three-and-out, with a punt back to the Denver Broncos. A controversial first down for the Broncos was challenged by Seahawks coach, Pete Carroll, but after review, the ruling on the field stood and the first down was upheld. Unfortunately for the Broncos, the Seahawks defense stood up and pushed the Broncos to choose whether to go for it with Russell Wilson in the final seconds or kick the 2nd longest field goal in NFL history. The Broncos opted for the field goal and missed it, sealing the victory for Geno Smith and the Seattle Seahwaks. Geno Smith ended the game 23/28, 195 yards, and two touchdowns, leaving the fans to question some of the calls by Denver's coaching staff down the stretch.